The debug access port (DAP) means the DP and all APs that are connected to the DP. It is to describe the whole debug hierarchy. It was initially designed as a standard to enable debug access to ARM cores but has been developed to a standard that also allows to access ARM and non-ARM cores in the same design via a single debug connector, all sharing the same pins on the device. This enables silicon vendors to easily create hybrid devices that contain ARM and non-ARM cores in the same design and which only expose a single standardized debug interface that allows debug access to all of the cores in the device. 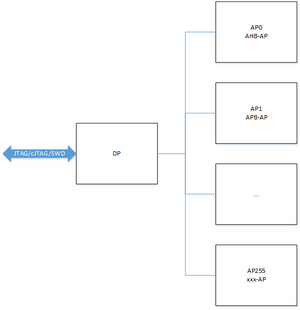 The debug port (DP) translates from the physical protocol that is used to communicate with the debug logic to the ARM specific internal debug logic. There are different types of DPs:

There is only one DP in a DAP.

Device internally, the DP understands 4-wire JTAG only. In case externally cJTAG is used as the physical protocol, there is a device internal 2-to-4-wire converter unit in front of the JTAG-DP that translates from cJTAG to JTAG. The DP still sees 4 signals internally, but only 2 are physically available at the pins of the MCU.

JTAG or SWD may be used to exchange information with the debug logic. The protocol is switched between JTAG and SWD at runtime, using specific switching sequences that are specified by ARM and do not hurt JTAG devices that may be in the same JTAG chain as the SWJ-DP.

A access port (AP) mainly is a memory bus interface to access the actual debug logic / resources. While the DP performs the protocol translation, an AP usually performs real memory accesses to read/write debug register. APs are comparable to DMAs and allow to issue memory accesses without using the CPU core. There are different types of APs:

While there is only one DP in a DAP system, multiple APs may be connected to a single DP.

This was the first AP type to be introduced and was first used on Cortex-M based MCUs. The AHB-AP acts like a second memory interface to the system memory and debug registers of the CPU core. In this setup, the AHB-AP and the CPU core share the same 4 GiB address space. This means, the debug registers are accessible via the debug interface as well as from the CPU core itself. A nice side effect of this setup is that the AHB-AP allows reading / writing the system memory (RAM, SFRs, ...) independent from the core (like a DMA). This allows techniques like SEGGER RTT to be used.

For AHB-AP based debug designs (Cortex-M), the location of the debug registers is fixed in the address space. This means, having multiple Cortex-M cores in a DAP requires a separate AHB-AP for each of them.

This AP type was introduced with the introduction of the APB-AP. As the APB-AP does not allow system memory and the AHB-AP is somewhat limited because it only support a 4 GiB address space (32-bit), the AXI-AP was introduced to allow memory accesses independent from the core again but keeping the debug / system address space separation. In addition to that, the AXI-AP supports a 64-bit address space which is important for later Cortex-A designs that are based on ARMv8-A and support more than 32-bit.

This AP type is different from the other ones as it does not provide a DMA-like functionality to access memory. The JTAG-AP is a special AP type to be able to support legacy core designs that have non-memory-mapped debug registers which are accessed via specific JTAG instructions (Shift-IR). For example, if a design shall incorporate a Cortex-M core and an ARM11 core, the Cortex-M would be accessible via an AHB-AP and the ARM11 would be behind a JTAG-AP, both connected to the same DP. The JTAG-AP allows to issue specific JTAG instructions to the ARM11 without bothering the other cores in the same DAP. 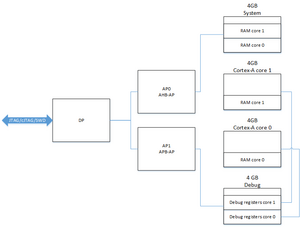 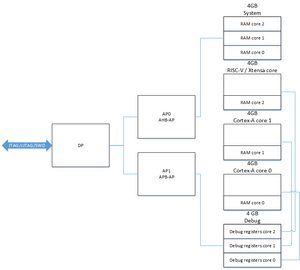 Since CoreSight SoC-600 it is also possible to have the debug AP of the core behind another AP (usually an APB-AP). This is a very rare but possible setup.