The S32K3 family from NXP includes Cortex-M7 based MCUs in single or dual core configurations supporting ASIL B/D safety applications. The S32K3 family is supported since J-Link software version V6.89c.
NOTE: There are different device configurations available. For details regarding which configurations are available and which are supported by the J-Link software, please get in touch with NXP (NDA required). Due to the fact that most device information are under NDA, SEGGER is allowed to provide very limited support, only. If you encounter any issues with the S32K3 device support, we recommend to get in touch with NXP directly. They will involve us if required.

Following flash regions are supported by the J-Link:

The J-Link performs a device specific reset sequence.
NOTE: The reset pin needs to be connected in order to guarantee a proper reset.

Some S32K3 devices features a second core. Right now, the J-Link software does support the main core, only. Support for the second core is planned for future versions.

In order to use trace on the NXP S32K344 MCU devices, the following minimum requirements have to be met:

The project has been tested with the minimum requirements mentioned above and the following two eval board:

The project below is utilizing the on-chip trace buffer (it is not meant for streaming trace) and works with any NXP S32K344 board. 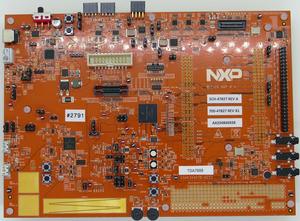 The S32K3X4EVB_T172 needs some solder bridges closed and resistors removed for all 4 trace data pins to work. For more information about this see the board specific schematics.

The following pictures show oscilloscope measurements of trace signals output by the NXP S32K3X4EVB-Q257 using the example project. All measurements have been performed using a Agilent InfiniiVision DSO7034B 350 MHz 2GSa/s oscilloscope and 1156A 1.5 GHz Active Probes. If your trace signals look similar on your trace hardware, chances are good that tracing will work out-of-the-box using the example project. More information about correct trace timing can be found at the following website. 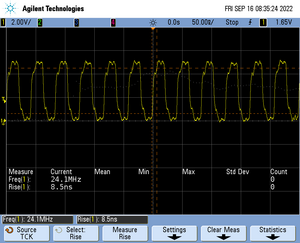 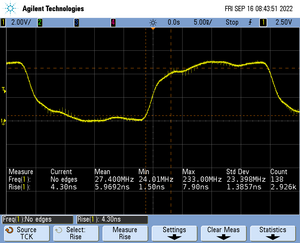 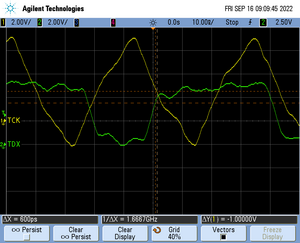