Setting Up Trace with Ozone

This wiki article describes the configuration of trace within Ozone. For a general overview about trace with J-Link and J-Trace, please refer to SEGGER's website and the J-Link/J-Trace user guide.

The Cortex architecture principally allows two ways how trace data may be moved from the target to the PC: in a buffered (ETB/MTB) and a streaming (ETM/PTM) fashion. ETM trace has many advantages over ETB trace but also an extended hardware requirement (see below).

Buffered trace requires the target to contain an embedded trace buffer (ETB) or a micro trace buffer (MTB). The trace buffer must be accessible to J-Link/J-Trace, i.e. accessible via the selected target interface. ETB-Trace otherwise poses no additional requirements on the hardware setup.

Streaming trace requires the target CPU to contain an embedded trace macrocell (ETM) or a program trace macrocell (PTM). The trace data generated by these units is emitted via dedicated CPU pins. It is target dependent if these trace pins are present and to what type of debug header they are connected, if any. Most commonly, the trace pins are routed to a 19-pin Samtec FTSH "trace" header.

Depending on the hardware setup, trace with Ozone may need to be configured via the project script or trace settings dialog as described in the following sections.

The following table summarizes all Ozone commands (settings) provided to configure trace. These commands should be executed from project file function OnProjectLoad, with the exception of command Debug.ReadIntoInstCache.

This section gives a more detailed description of the trace settings listed above.

Ozone's debug windows can be fed with trace data from different sources. Currently, only one trace source can be active at any given time. The supported trace sources are the valid arguments of command Project.SetTraceSource, as described below.

Ozone provides command Project.SetTraceTiming(d1, d2, d3, d4). This command instructs J-Trace to delay the sampling of individual trace pins. The valid value range is -5 to +5 nanoseconds at steps of 50 ps for each pin. The delays may be necessary in case the target hardware does not provide sufficient setup and hold times for one or multiple trace pins. In such cases, delaying TCLK can compensate this and make tracing possibly anyhow. Per default, J-Trace samples all trace pins synchronously with a delay of 2.0 nanoseconds. The trace pin delay configuration is only relevant when the selected trace source is "Trace Pins" / ETM.

The trace pin sampling delays can be conveniently edited via the trace timing subdialog of the trace settings dialog. 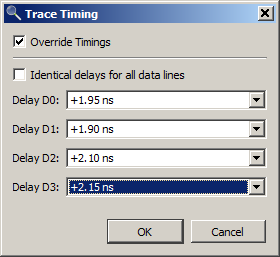 J-Trace PRO is able to read the execution time of traced instructions from the target. Among other uses, this enables power profiling via Ozone's timeline debug window.

The command Edit.SysVar(VAR_TRACE_TIMESTAMPS_ENABLED, on) is provided to enable or disable trace timestamps. When trace timestamps are not required, the option should be disabled to enhance the overall tracing performance.

the instruction cache has to be initialized manually via command Debug.ReadIntoInstCache(Addr,Size). For details on how to use this command within an Ozone project script, please refer to Debug and Trace with RAM Functions. When the instruction cache is not initialized, Ozone will display a warning message indicating that debugging information will be inaccurate.

The trace settings dialog is accessible from the tools menu.

This dialog allows users to conveniently edit all of the trace settings described above. 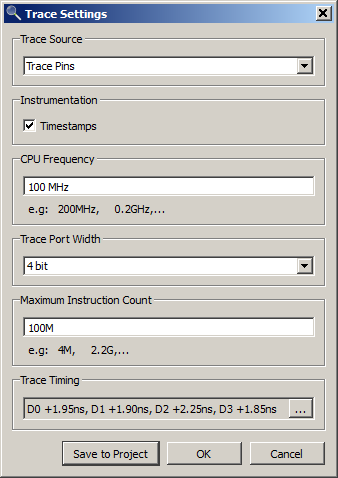 Many Arm-Cortex targets allow trace data output to be limited to a set of user-defined program address ranges. When selective tracing is active, the target's trace buffer is only filled with trace data that matches the configured constraints. This makes selective tracing particularly valuable on hardware setups with limited trace buffer size and no streaming trace capability.

It is to a high degree target dependent if selective tracing is supported and to what extent. A generic requirements overview cannot be given. Instead, refer to your MCU model's user manual or contact the manufacturer when unsure about the capabilities of your target.