Knowledge about the startup completion point enables Ozone to safely initialize its instruction-level debug information once the entire machine code of the debuggee is accessible to the debugger. For example, a debuggee may decompress parts of the program code into target RAM before branching to the main function. In this situation, the compressed machine code is not accessible to the debugger before startup completion.

When the program is not reset during target connection, startup completion is defined to occur on the first CPU halt. This is the case when the connection mode is CM_ATTACH or CM_ATTACH_HALT.

All instruction-level debug features of Ozone, including:

require the debugger to perform an initial analysis of the machine code to be debugged. For performance reasons, Ozone stores the results of any instruction analysis it performs into its instruction cache. The instruction cache is updated upon entry of the following debug events:

This means that when:

the debugger will perform the instruction analysis automatically and no user interaction or project configuration is required. In all other cases, e.g. when: 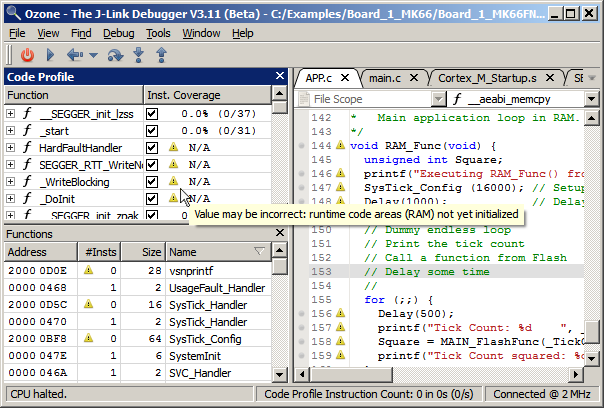 Note that each time the instruction cache is updated, Ozone also calls J-Link API function ReadIntoTraceCache to update the trace cache of the J-Link firmware. Thus, explicitly initializing the trace cache from the project script is not required.

Ozone command Debug.ReadIntoInstCache(Addr,Size) can be called from the project script in order to update Ozone's instruction cache within an arbitrary memory address range. The command has two arguments which are the address and size of the memory address range to analyze. The preferred way to employ this command is to call it from project script function OnStartupComplete, when target memory is ensured to be initialized and readable. This command returns 0 on success and -1 on error.

Debug features that use or acquire

are started at the startup completion point, as summarized below.

Ozone handles ELF files with copied initialization image the same way as ELF files with pure flash content; all instruction-level debug information is readily available when the ELF file is opened. The setting of system variable VAR_STARTUP_COMPLETION_POINT is irrelevant regarding RAM-debug in this case.

RAM Debug of Functions not copied From Flash

When debugging ELF programs with decompressed or algorithmically initialized RAM code, the setting of system variable VAR_STARTUP_COMPLETION_POINT is relevant and may have to be adjusted. The system variable tells Ozone when it can safely read machine code from target memory in order to provide instruction-level debug information for the decompressed code areas.

Ozone is usually unable to automatically initialize its instruction cache with these additional code areas. Accordingly, users must setup the project script to update Ozone's instruction cache as required. For this, command Debug.ReadIntoInstCache is provided.

This project executes functions from both Flash and RAM. The startup code and functions main() and MAIN_FlashFunc() execute from Flash, all other functions, including ISRs, execute from RAM. The startup code finishes RAM initialization before main() is reached. To debug and trace this example, no special configuration is required. Ozone will automatically identify the program's code segment types and initialize its instruction cache accordingly. Since the example contains compressed RAM code, the instruction cache will be initialized partially at program load time and partially upon startup completion. The project is configured to run on the emPower Board, but the application can run on any Cortex-M4 device with Flash at 0x00000000 and RAM at 0x2000000000.

The application outputs a simple message: