This article describes device specifics of the Renesas Synergy microcontrollers.

In general, the J-Link DLL expects the trace clock to be equal to the CPU clock. As the Synergy device series allows to enable a pre-scaler which is valid for trace clock only, this assumption may be incorrect resulting in invalid SWO data are read. To make sure that the J-Link DLL behaves as expected, please make sure to not enter the actual CPU clock but the CPU clock multiplied with the ICKdivider configured in the System Clock Division Control Register (SCKDIVCR) divided by the trace clock divider configured in the Trace Clock Control Regigster (TRCKCR). Further information regarding this can be found in the two examples below.

This article describes how to get started with trace on the Renesas Synergy S1 R7FS12477 MCU. This article assumes that there is already a basic knowledge about trace in general (what is trace, what different implementations of trace are there, etc.). If this is not the case, we recommend to read Trace chapter in the J-Link User Manual (UM08001). The Renesas Synergy S1 R7FS12477 MCU implements tracing via via on-chip trace buffer (MTB), so a J-Link can be used for tracing. Tracing over pins is not supported by this target device.

In order to use trace on the Renesas Synergy S1 R7FS12477 MCU devices, the following minimum requirements have to be met:

The following sample project is designed to be used with J-Link Plus and Ozone to demonstrate MTB trace. The project has been tested with the minimum requirements mentioned above and a DK-S124 evaluation board. The sample project comes with a pre-configured project file for Ozone that runs out-of-the box. In order to rebuild the sample project, SEGGER Embedded Studio can be used.

Note:
The MTB does not support streaming trace. 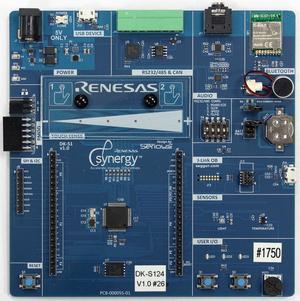