Difference between revisions of "Tracing on Silicon Labs EFM32GG11B"

This article describes how to get started with trace on the Silicon Labs EFM32GG11B MCU. This article assumes that there is already a basic knowledge about trace in general (what is trace, what different implementations of trace are there, etc.). If this is not the case, we recommend to read Trace chapter in the J-Link User Manual (UM08001). The Silicon Labs EFM32GG11B MCU implements tracing via pins , so a J-Trace can be used for tracing.

In order to use trace on the Silicon Labs EFM32GG11B devices, the following minimum requirements have to be met:

The following sample project is designed to be used with J-Trace PRO and Ozone to demonstrate streaming trace. The project has been tested with the minimum requirements mentioned above and the EFM32GG11 evaluation board, STK3701A. The sample project comes with a pre-configured project file for Ozone that runs out-of-the box. Please note that this particular needs additional hardware settings to enable external trace probes, see section Specifics/Limitations. In order to rebuild the sample project, SEGGER Embedded Studio can be used.

Note: The example is shipped with a compiled .JLinkScript file, should you need the original source it can be requested at support@segger.com

To create your own .JLinkScript file you can use the following project as reference: Tracing on SEGGER_Cortex-M_Trace_Reference_Board

The EFM32GG11 evaluation board can only be used in 1-bit trace mode as the other trace pins are mapped to other trace pin locations which are not compatible to each other. To enable the external debug header for your trace probe Simplicity Studio is needed. There you can select the debug mode to "IN" instead of "MCU" which is shown on the display on the eval board. 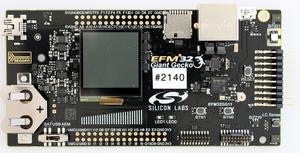