From SEGGER Wiki
(Redirected from STM32WB)
Jump to: navigation, search

The ST STM32WB series devices are heterogeneous dual-core MCUs with a Cortex-M4 for the end-user application and a Cortex-M0 for the BLE stack. The STM32WB series currently consists of 3 sub-families:

The STM32WB device series comes with varying sizes of internal flash up to 1 MB, which is generally supported by J-Link.


Concerning STM32WBxxxG (1MB) devices:
A chip erase for these devices will usually fail.

This is because a part of the flash is protected as long as a wireless stack is present, resulting in a write protection error during chip erase.

Root Security Service (RSS) and the Firmware Upgrade Service (FUS) are responsible for secure wireless stack updates and encryption key management. This firmware is executed by the secure core (Cortex-M0) and is not accessible by the end user or a debug probe. This firmware is factory installed in the STM32WB flash memory and is marked as secured. Therefore the end-user needs to take into consideration when choosing this device, as part of the memory will be already reserved for the RSS (around 5%). The RSS uses between 10 sectors (v0.5.3) and 12 sectors (v1.1.0) and is written in the flash memory end sectors. For example, for a 1MB device, this will be stored starting at the address 0x080F4000 for v1.1.0 and 0x080F6000 for v0.5.3.

How to update the Wireless Stack

Uploading a wireless stack to the STM32WBxx can be done with J-Link Commander. This section describes how this is done via the following steps:

Note:
FUS & Stack upgrades are currently not supported via J-Flash.

The wireless stack binaries can be downloaded from https://www.st.com/en/embedded-software/stm32cubewb.html.
After downloading:

Bellow in Available Stacks from ST you may find the current available stacks and assigned addresses.

It is important that the device starts in system boot mode. The update procedure relies on the system boot loader to be executed, as the system bootloader sets up the shared tables, which are required for the Wireless Stack and FUS upgrade.

This can be done with the following configurations:

Note:
For information on how to program the option bytes, please refer to this example

Connect to the Device with J-Link Commander

Before connecting to the Device, please make sure you are using the latest version of the J-Link Software Pack. Open the J-Link commander (%JLinkInstallDir%\JLink.exe) using the following command line:

The above command output should be as following: 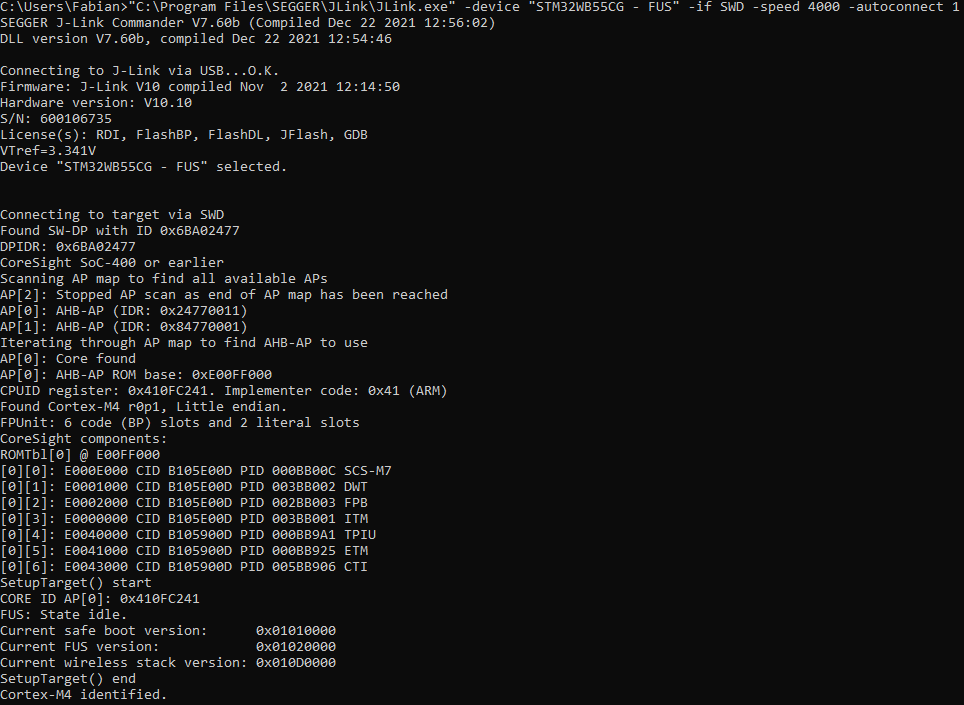 After connecting to the MCU successfully, download the Update using the Reset and LoadFile commands. Even though resetting the device is not mandatory, it is highly recommended.

Note:
The address the wireless stack has to be downloaded to differs depending on update version and device. 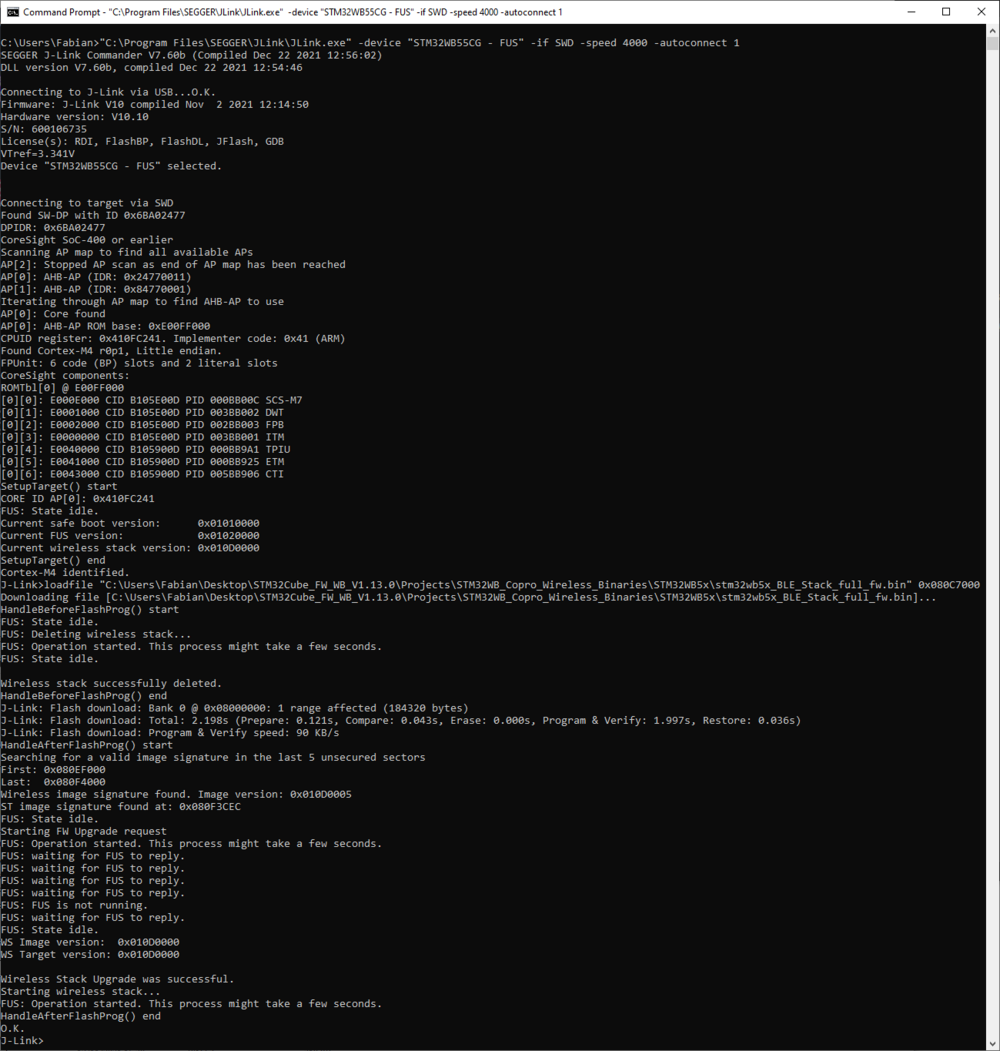 Note:
The wireless stack is always started on disconnect, if it was successfully upgraded in the same session, even when it was not running on connect.

How to delete the Wireless Stack


Not providing an erase range also works. However, J-Link will report a erase error, and a part of the flash will be deleted.

To prevent this, the above address range is provided. 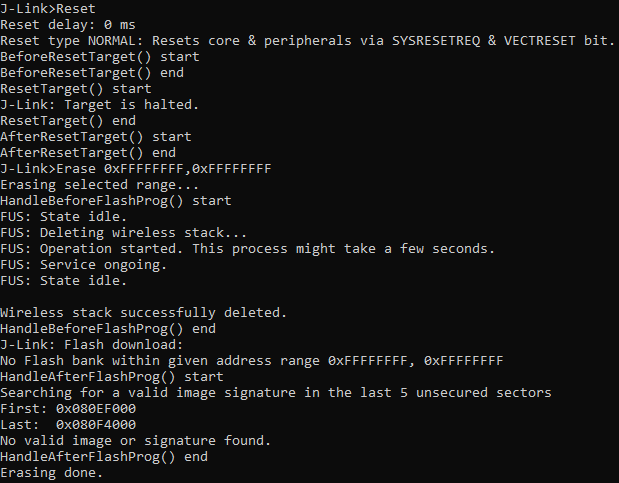 How to update the RSS

Same process as a wireless Stack. Simply loadbin over J-Link Commander to the memory specified by ST and wait for the process to finish.
Warning:
Once the FUS is updated from the v0.5.3 to v1.0.1 is not possible to reverse RSS or install WS from previous versions. The RSS/FUS can only upload wireless stacks within the same release version.

How does it work

Note:
This process takes around 20 to 30 seconds depending on the Wireless stack size.

For the correct download address, please refer to:
STM32Cube_FW_WB_V<Version>\Projects\STM32WB_Copro_Wireless_Binaries\STM32WB5xRelease_Notes.html

In case a command is not supported out of the box, it has to be sent manually. This can be done via the IPCC mailbox system used for FUS communication. To do so, a connection has to be established via the J-Link Commander. See: Connect to the Device with J-Link Commander.

In case a Payload is required for the command, it has to be added after "Send command <Cmd>". The payload contains 0 - 255 bytes:

Note:
Instead of waiting for the channel to turn unoccupied, we simply wait 500ms in the example. Alternative, wait for C1TOC2SR Channel 2 bit (bit 1) to turn 0.

How does J-Link communicates with the FUS and performs the Wireless stack upgrade/delete requests?
The communication between the J-Link and the RSS/FUS is performed by use of the IPPC(Inter-Processor Communication Channel) and shared tables that are pre-defined by Cortex-M0.

Does this mean that the Cortex-M0 is always running the RSS firmware?
No, the RSS firmware is only running when a wireless stack is not installed or a request is made through the IPCC and shared tables.

Can I delete the RSS firmware?
No, it is marked as secure so it is not possible to delete it.

Can I make my own Wireless stack and upload it?
Currently, ST only allows uploading STs encrypted wireless stacks.

Connect to the device using the following command line:

Read the OPTR register, and check if the required boot options are already set.

If not, you can modify them via the following sequence.